This is short update on what we’ve been doing since receiving so many wonderful grants during the GitCoin CLR matching fandango. This money goes a long way. It allows one of us (Rush) to make a trip to EthDenver, where he will be judging some hacks. It has also paid for some much needed help developing the React frontend. If you donated (or even if you didn’t), and you’re in Denver this week, seek me out. I’ll be happy to share our latest work.

We’ve accomplished three primary things so far this year: (1) nearly finished trueblocks-core (our backend), (2) made significant progress on the frontend (trueblocks-docker), and (3) invented the idea of user-centered blockchain exploring.

Progress on the Backend#

In the fall of 2018, we received an Ethereum Foundation grant intended to help us complete the TrueBlocks backend, which is not yet done, but it’s pretty close. Our backend is thoroughly covered by about 1,500 test cases, so it’s easy to extend and change at this point.

There are two primary things yet to complete: (a) user onboarding, and (b) documentation. We’ve delayed these two things because we feel that building the frontend will help us understand better how onboarding should work. When one is building local-first, fully-distributed apps, it’s not at all clear how things work until you get them to work…

Progress on the FrontEnd#

We’ve made excellent progress on our frontend. We started by building a Javascript / React / Redux application, but we plan to port it to Typescript / Electron soon. (Eventually — when the world catches up — we’ll throw away both versions and the entire web-centric stack and write a truly native distributed app.)

The current version is partially documented (we’re documenting as we go) and has testing built in from the start. Improvements on both fronts.

One thing has become very clear: the more we build, the more excited we get. Local-first, distributed-to-the-edge software is very different than the web-based old-fashioned mess of the current stack.

Here’s a nice picture of our current app, which we’ve taken to calling the TrueBlocks Account Explorer: 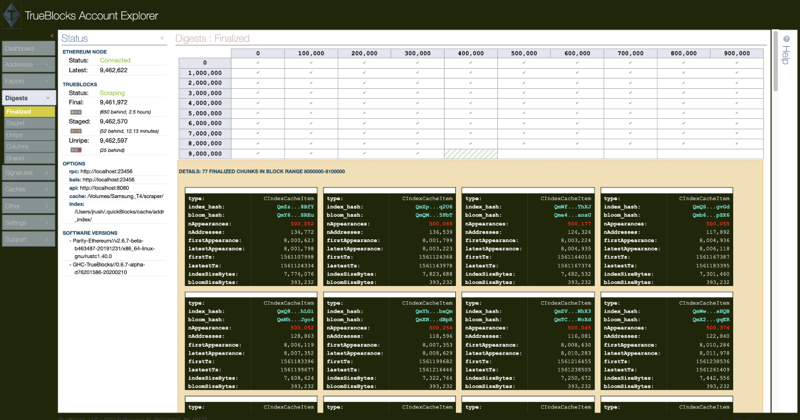 This is a screen shot of the ‘Digests’ page which gives the user insight into the ‘chunks of the index of appearances.’ We’ve written about this elsewhere and thelsewhere (sic).

We’ve learned a lot of unexpected things while building this app out (some of them may seem obvious):

We claimed above we invented the idea of user-centered blockchain exploring — maybe, maybe not, but I do think we’re the first team to have actually implemented it. Here’s another fine screen shot: 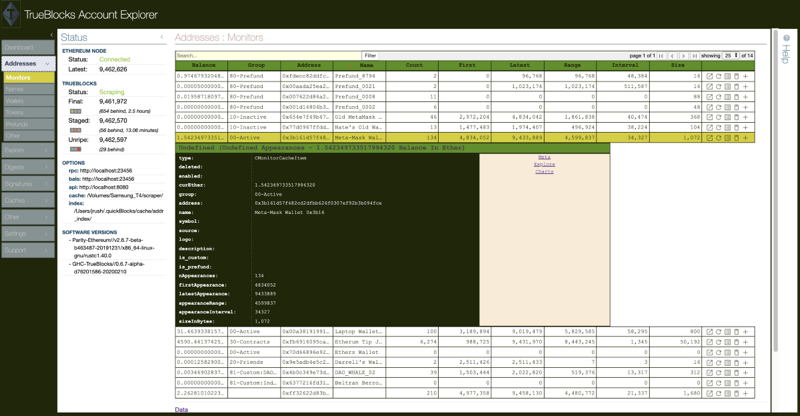 This is the ‘skinned’ Monitors page of the TrueBlocks Accounts Explorer (TrueBlocks frontend allows you to change your skin!) Here, we’re showing a list of addresses that are being actively monitored. From this page, one can access the Explore page which allows you to scroll through the history of the account(s), seeing ‘everything that ever happened to the account.’ (That last sentence is what we’ve been working on for four years.)

Unlike web-based explorers, where the data has been extracted prior to the user interacting with it, out application actively scrapes the data from the chain as being displayed. (The data is subsequently cached to improve performance — caching immutable data is very straight forward).

Because we want to run on small machines (laptops, desktops), we don’t have the luxury of extracting the entire Ethereum data structure into a fast database prior to the user telling us what she’s interested in. Instead, we extract only the index, delaying further extraction until the user tells us what she wants.

When the user asks us to monitor an address, then and only then, do we extract the history of only this single address. This keeps non-database database small (MBs instead of 10s of TBs needed to extract prior to user instruction). This is why our system works on a laptop. The index gives us the ability to extract exactly what the user wants—her transactions and no other.

This is what we mean by User-Centric Blockchain Browsing™. If we didn’t invent the idea, we definitely invented those words.

We’re going to be in Denver this week, and we would be very pleased to share more of our work with you. Hit me up at my twitter account (@trueblocks) or by email (see our website http://trueblocks.io). We’ll also be attending EthBerlin and Berlin Blockchain Week this year. Maybe we’ll have a chance to speak there.

Help us with out work. Visit our GitCoin grant page here: https://gitcoin.co/grants/184/trueblocks, and donate today.