And why it matters

I recently wrote a piece discussing how I defeated the Ethereum DDos attack using TrueBlocks. Doing this was important because it freed me from the pain of a slow RPC. Speed allows me to analyze the Ethereum data iteratively. I can find more interesting stuff. 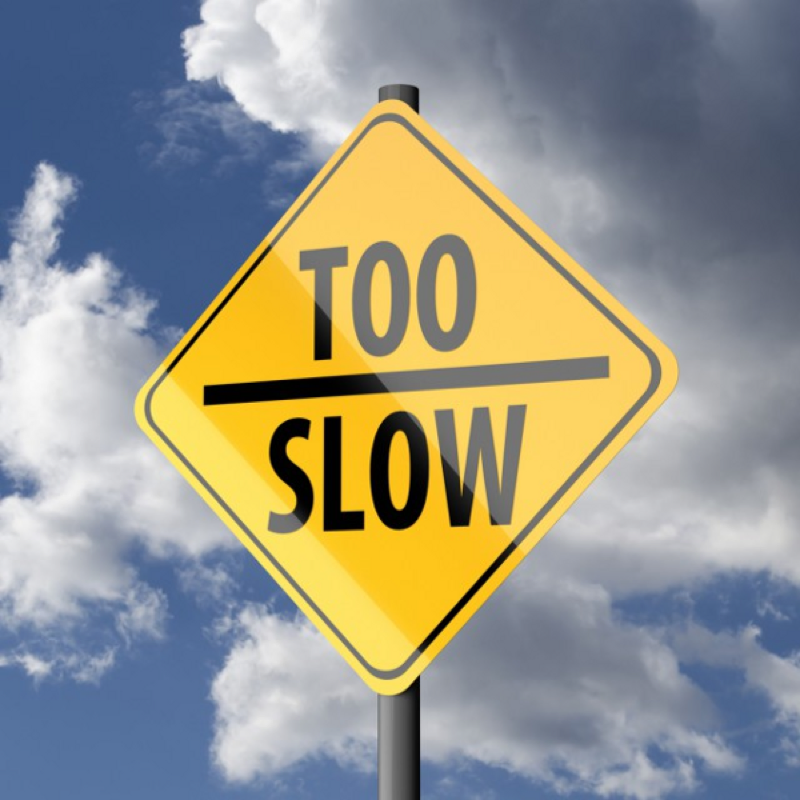 The Ethereum dataset is big (and growing). I want to be able to scan through the entire thing. I want to be able to do this on a laptop. This last fact makes it impossible for me to create a separate, independent copy of the data. If I want to do data analysis, I have to do it against the node’s data directly.

You may download the data I produced for this story and play around with an interactive graph here and here. Let’s dive in to the data. 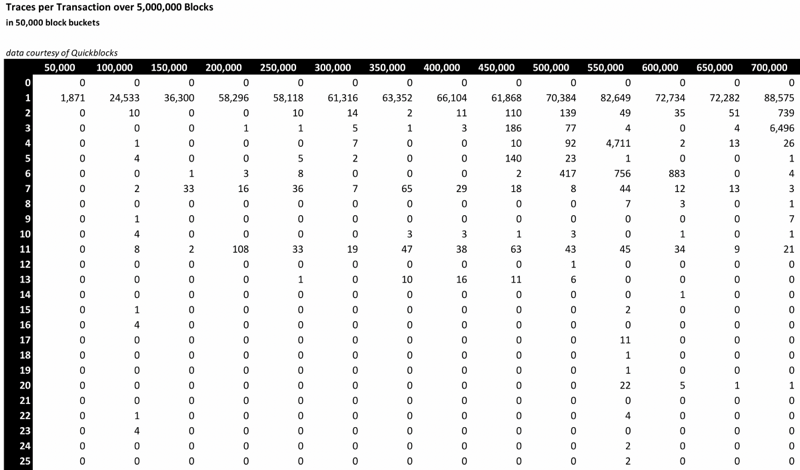 Here’s the top-right portion of the data along with totals for the number of transactions with that many traces and the corresponding percentage of all transactions this represents. 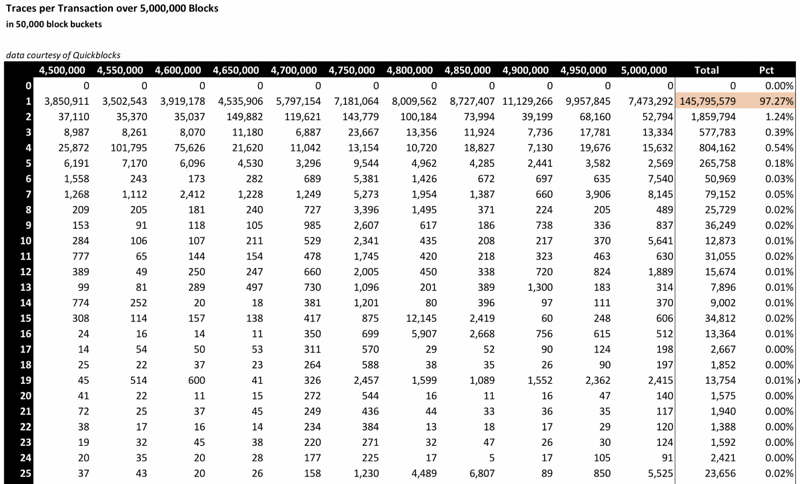 As you can see, almost every transaction ever cast against the Ethereum blockchain created a single trace. (Transactions themselves generate one trace which explains why there are no zero-trace transactions.) 97.27% of all transactions either sent ether from one account to another or transacted against a smart contract but did not do anything further. 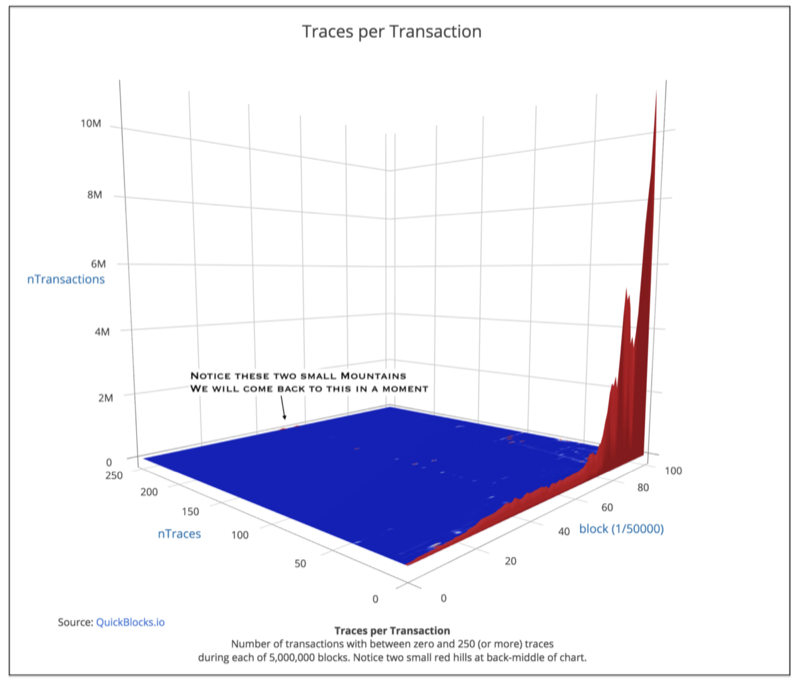 You can see the complete dominance of the one-trace transactions in red. But notice the two small red hills at the very rear of the chart. (The further back one looks on this chart, the more traces appeared in those transactions — the further right one looks, the higher the block number.) Also, notice the coloration of the ‘great plains.’ One can see the beginnings of a heat-map in the patchy colors in the plains (we will revisit this a bit later).

Let’s spin the view around and look at it from behind: 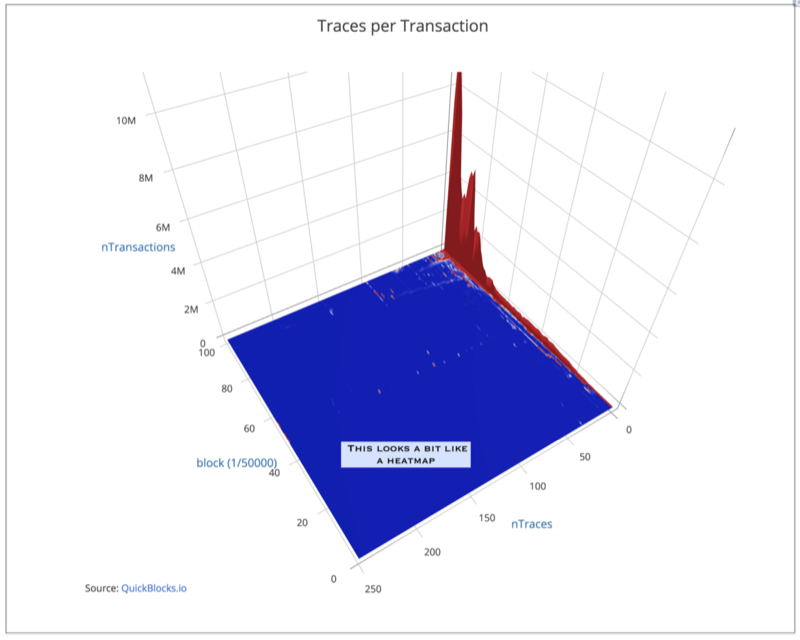 Here, you can see the same data from the other side. The dominance of the one-trace transactions (in red) is apparent here as well. And, also, you can start to see that as the chain matures, we are seeing a growing number of transactions with multiple traces.

What happens if we remove the one-trace transactions so we can see more clearly? What do we see then? 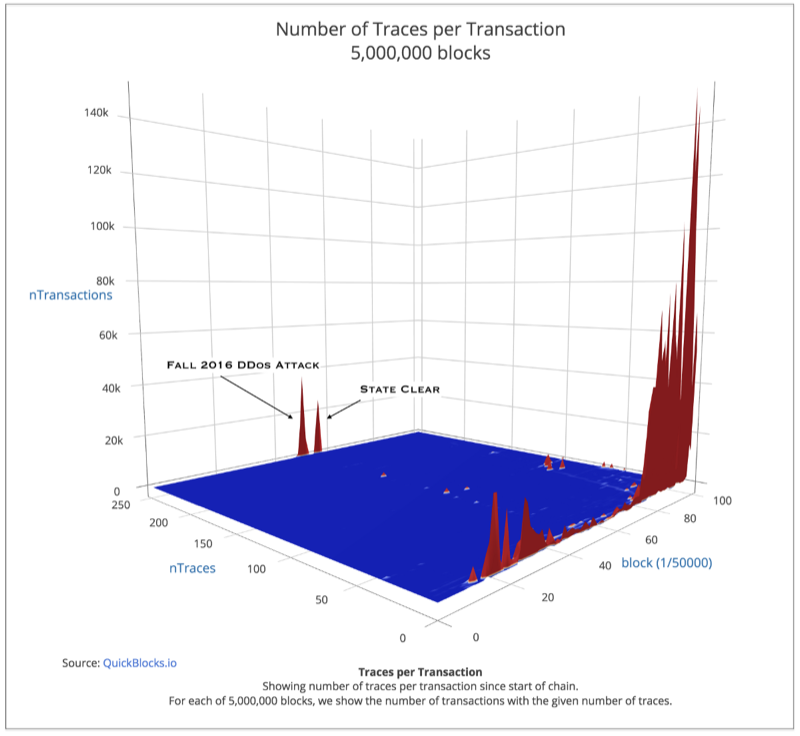 In the above chart, we’ve removed one-trace transactions. Every transaction here created at least one internal transaction or message call. We are now starting to see the problem that I call the Trace Data Problem.

Please notice, however, the two sizable spikes at the rear of the chart. These two spikes represent the DDos attack and then, after a pause, the solution to the DDos attack. It doesn’t look too bad, but as we will see these two collections of transactions are much worse than they look. Every chart so far represented a count of the number of transactions given that number of traces. 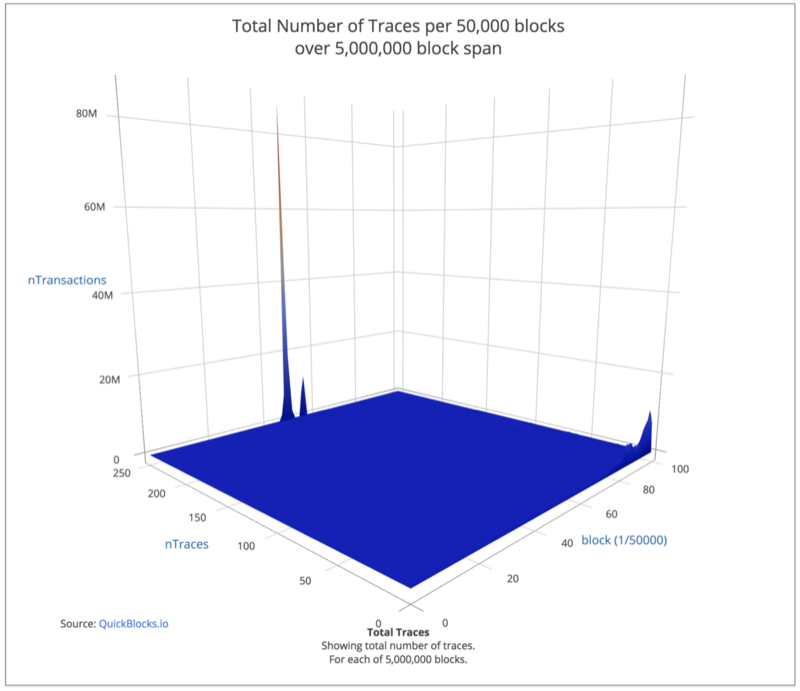 We can see here why scanning the Ethereum blockchain — especially when one is looking at traces — is so onerous. To get through just 100,000 transactions, one must scan more than 138 million traces. This is why the RPC is so slow. (I suspect that this is also why it takes so long to sync the blockchain.)

Let’s look at some numbers:

The Ddos attack was bad. It created more than 20,000,000 empty accounts. This caused a huge bloat of the state database which had to be cleaned up. It was absolutely necessary to correct the problem by removing those dead accounts, and the Spurious Dragon hard fork did that, albeit by creating a lot of additional traces. The solution to the Ddos problem created nearly a third again as many traces as the attack itself. This is one of the downsides of an immutable data structure such as a blockchain. At TrueBlocks, we’re doing everything we can to not let this stop us from looking at the data — we are constantly looking at the data…

Do you see anything interesting? We do. We’ll write about that in our next installment. 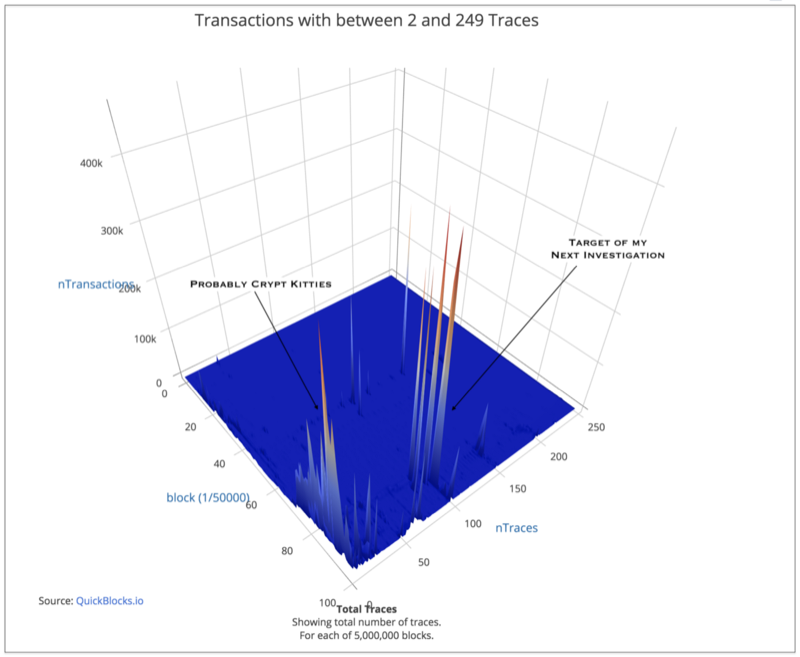 We’re interested in your thoughts. Please clap for us and post your comments below. Please consider supporting our work by sending a small (or large) tip to 0xf503017d7baf7fbc0fff7492b751025c6a78179b.

← How Many ERC20 Tokens Do You Have?
Defeating the Ethereum DDos Attacks →