And having fun while doing it

I am so deep down the rabbit hole of Ethereum data that I sometimes forget there is such a thing as the real world. And I care exactly zero if I never come up. Don’t ask me why. I’m pretty sure there’s no good reason.

Maybe my obsession with this has to do with something that happened to me in high-school. My guidance counselor administered a test intended to identify which career I should pursue. She watched me take the test and then carefully scored my answers. When she was done, she looked across the table and said, “You should look for careers that have nothing to do with people.” The remaining options for me where making things (factory work) and information processing. I took the latter path.

I’ve written software called TrueBlocks (http://trueblocks.io) that scans the Ethereum blockchain looking for interesting data. TrueBlocks allows me to easily summarize and accumulate data at each block. From there, I can make pretty pictures. Here is one such picture: 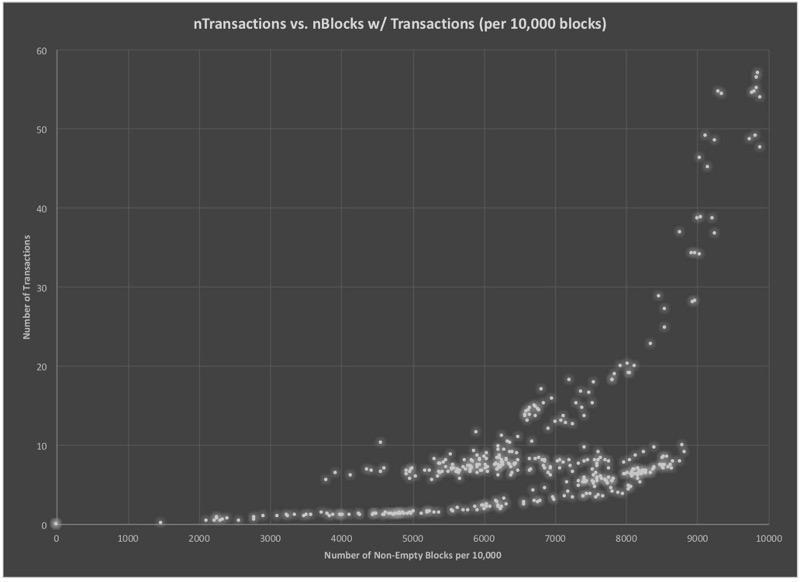 What Does it Mean?#

We wondered if there was anything interesting to be gleaned from the data. Do you see anything? I something of a pattern, but I’m not sure I understand what it means. There appears to be three distinct groups in the data. The first one, I’ve marked with an orange line. 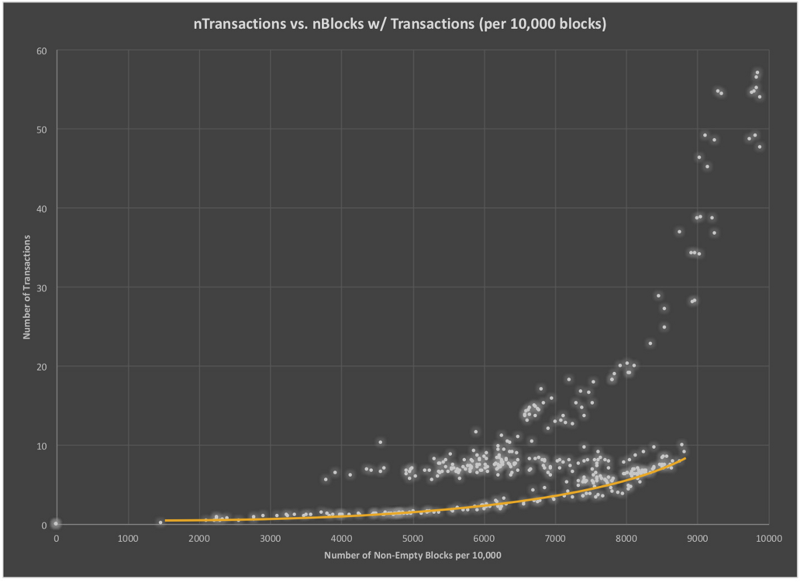 The second group of data is the purple line. 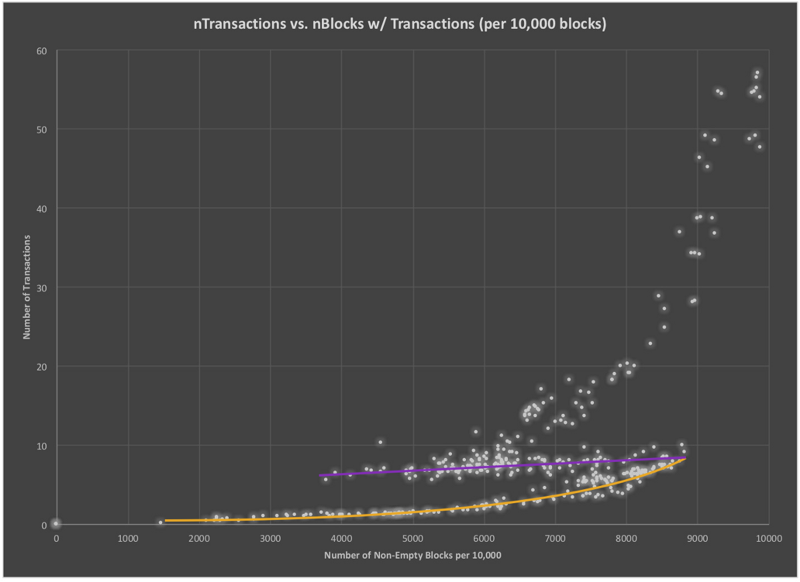 And the third is the green line. 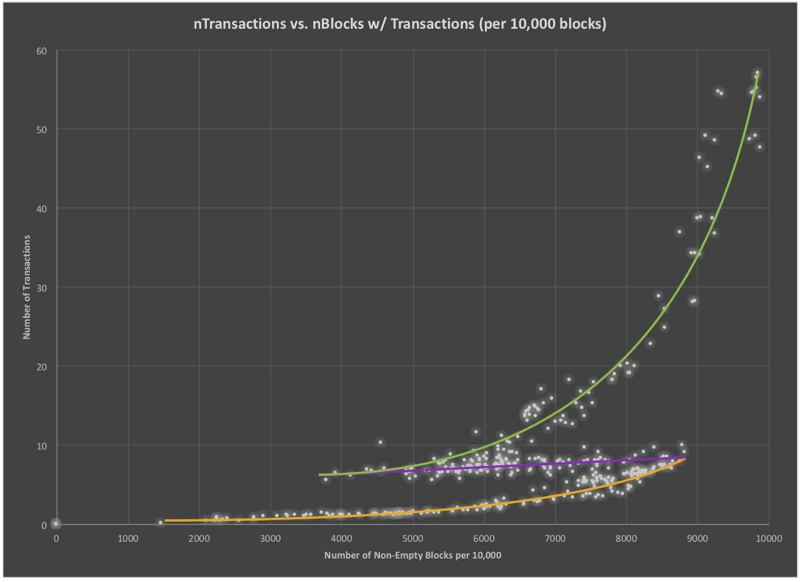 I hate to admit it, but I have no good explanation for why the data looks like this. I’ll give a possible explanation below, but I welcome any and all suggestions about other ways to look at it. Add your comments below.

My initial thought was that these patterns have something to do with the Ethereum mining software. I thought perhaps there are three different mining algorithms that miners naturally fall into. Something to do with profits, no doubt. But how to figure out if that hypothesis was true? No idea.

I decided to look at a simpler problem: when were these blocks produced? 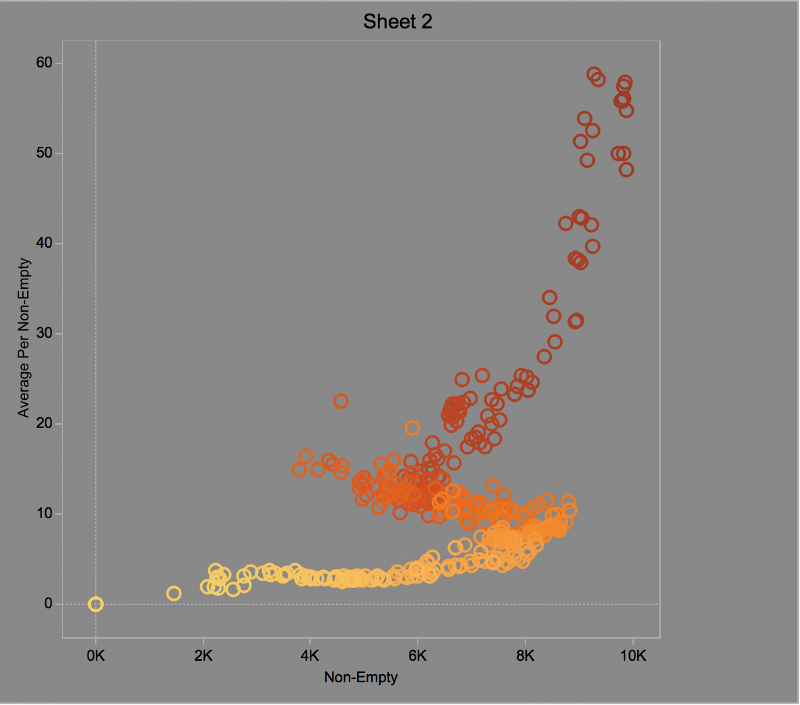 In this chart, earlier block numbers are colored yellow. The color tends toward dark red the higher the block number gets. Clearly, as the chain progressed, there was an early period with many empty blocks with relatively few transactions. Towards the middle of the chain’s lifespan (between December of 2016 and June of 2017, perhaps) there seems to have been a retreat.

Why Does This Happen?#

I didn’t really have a good explanation of why this retreat happened. I thought it might be possible that retreat was just an artifact of the way I was presenting the data. So I tried to dig deeper into that thought.

Next, is a chart showing the number of non-empty blocks plotted against the number of empty blocks. Obviously, if you lose on from one side, you gain one from the other, so the two lines mirror each other.

The DAO hack happened at block 1,718,497. Within days of the hack, the price dropped from $21.00 US to about $8.00. Three months later, there was the October 2016 DDos attack. You can see it in the spikiness around block 2,250,00. Did these two events cause a retreat in the activity on the chain? More empty blocks with less transactions per block? It seems likely to me. 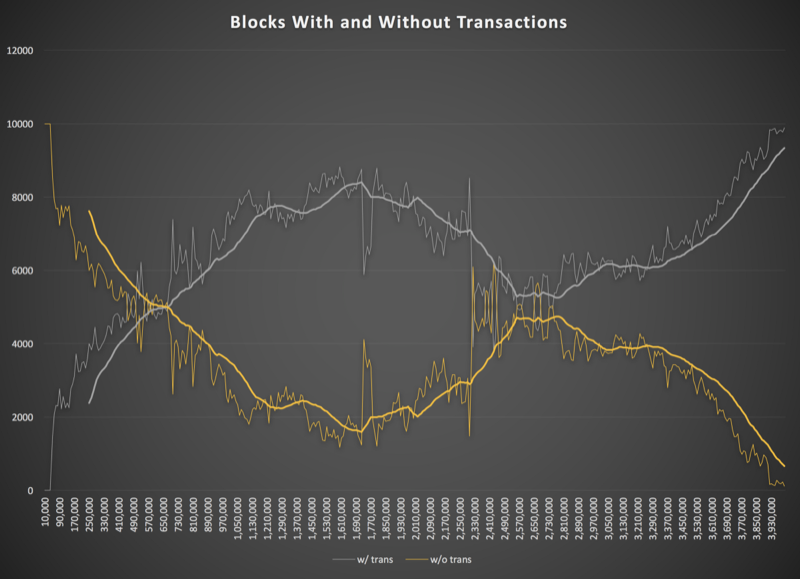 We’re interested in your thoughts. Please clap for us and post your comments below. Please consider supporting our work by sending a small tip to 0xf503017d7baf7fbc0fff7492b751025c6a78179b.