A Eulogy for The DAO

...or How I Learned to Love the Input Data Field…

…or How I Learned to Love the Input Data Field…

In this three-part series, we analyze the nearly 170,000 transactions made against the ill-fated smart contract “The DOA” since its inception nearly five months ago. The DAO is dead. This series may serve as part of its eulogy.

The DAO lived through four distinct time periods, each characterized by different user behavior, being (1) the Creation Period, (2) the Operational Period, (3) the Post-Hack Period, and (4) the Recovery Period. This first part of our series gives a broad overview of these periods and is followed in the coming weeks with two more installments presenting further details.

It is important to note, before we begin, that our analysis is a “work-in-progress.” There are three prominent areas of missing information: the moment-by-moment ‘ether’ balance of the contract, the inclusion of ‘internal transactions,’ and an analysis of ‘in-error’ transactions. This information is available, of course; but, to the best of our knowledge, it’s not available ‘quickly’ or ‘automatically.’ The primary focus of our project is the delivery of smart contract analysis and monitoring data — for any Ethereum address — in as quick and as automatic a way as possible. Delivering fast, interactive data for any smart contract is fundamental to what we are working on. Once this missing data is available quickly, we’ll bring it to you.

In the meantime, on with the analysis…

Four Periods of “The DAO”#

The start of each of the four periods we’ve identified is signaled by an uptick in activity as can be seen by the green- and orange-shaded areas above. This analysis documents these spikes and proposes explanations for each. Access to further information about each period will be provided later in this series and is also available on the TrueBlocks website.

Following is a summary of each of the four periods we’ve identified:

In the coming weeks we will be expanding on and completing this three-part series of articles delivering our eulogy for “The DAO.”

To be honest we pushed this first article out a bit early because we wanted to finish it before DevCon2 in Shanghai. (We’re going!) If you wish to talk with us about our project, please contact us. In the meantime, here are two screen shots of coming attractions. We are busy analyzing and writing about each individual time period. We’ll have it out to you as soon as we can. 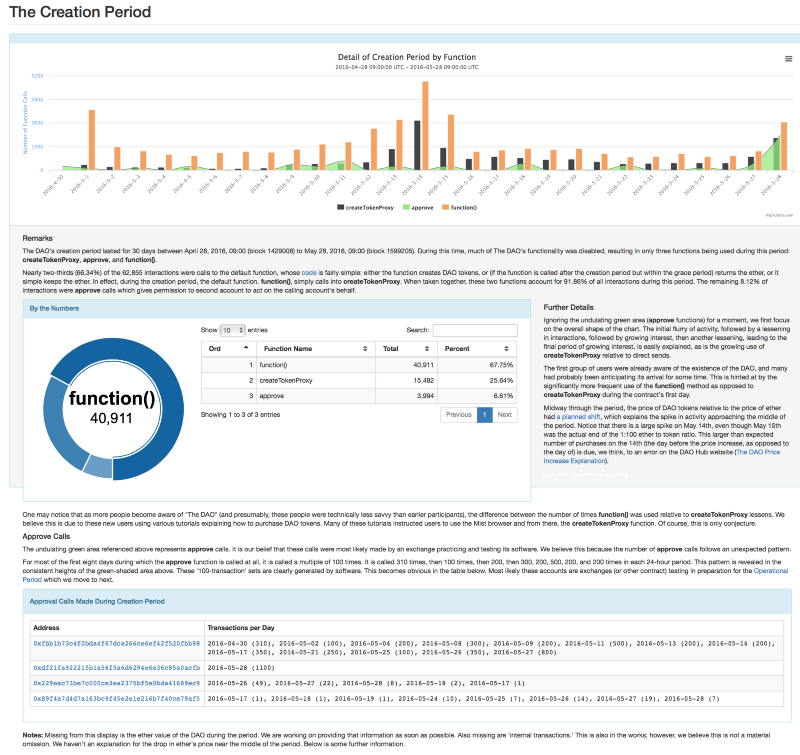 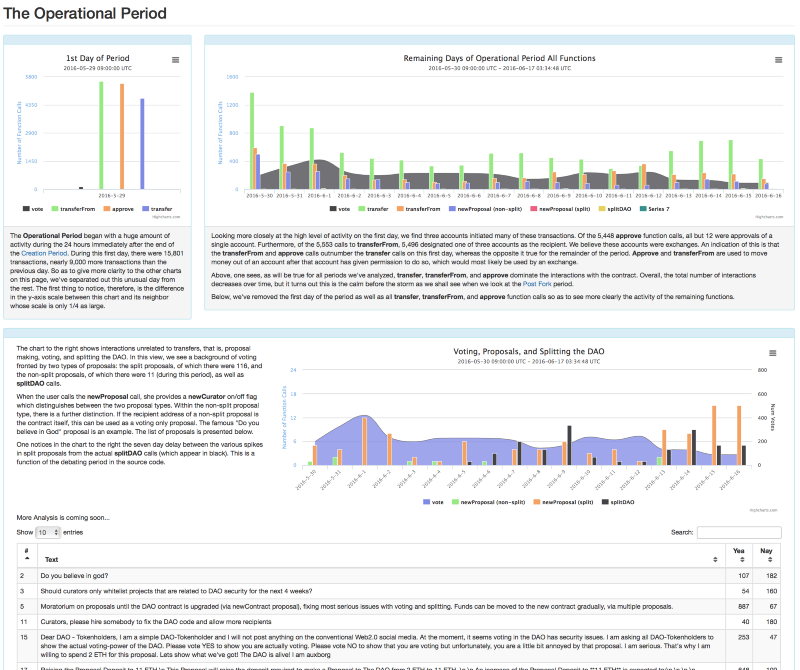 One may say one thing with certainty about “The DAO”: It was an amazing ride.

The initial excitement of a purely un-managed piece of software raising $150,000,000 US dollars in 30 days — in spite of there being no-one in charge — was exhilarating. Then, the disappointment of such meager voting. And then, on the morning of the hack, waking up to find that the price of ether had plummeted (along with my naive belief that it was possible to write an immutable, un-hackable code). Later, the way the community came together (sort of) and carried out the hard fork was inspiring, that inspiration only to be dashed by the zombie-like resurrection of the lesser chain we all incorrectly assumed would die a quiet death. It’s been an amazing ride.

On a personal note, I’ve enjoyed tracking the data generated by “The DAO” but I’m glad it’s over. My desire to “get at this data” gave me the impetus to develop the tools I’ve needed to feed my obsession (i.e. the TrueBlocks website and the EthSlurp software). I hope you’ve enjoyed reading this analysis. Please stay tuned and we’ll get you more.

If we can do anything for you — for example create an analysis/monitoring website similar to the one we’ve created here for your smart contract — please contact us. We’ll be happy to speak with you.

— — — Notes: The effect of the hack on the price of Ether is very obvious in the first chart, as is — a few days after the hard fork — the effect of Ether Classic not dying a peaceful death. All transactions represented on these charts exclude “in-error” transactions unless otherwise noted. “Functional groups” are further explained on the website.

To Do: (1) Display the total accumulated ether (and US dollar value) and DAO tokens on all appropriate charts. (2) Include ‘internal transactions’ in this reporting.